Psst… Sip On These Holiday Drinks In Denver This December! 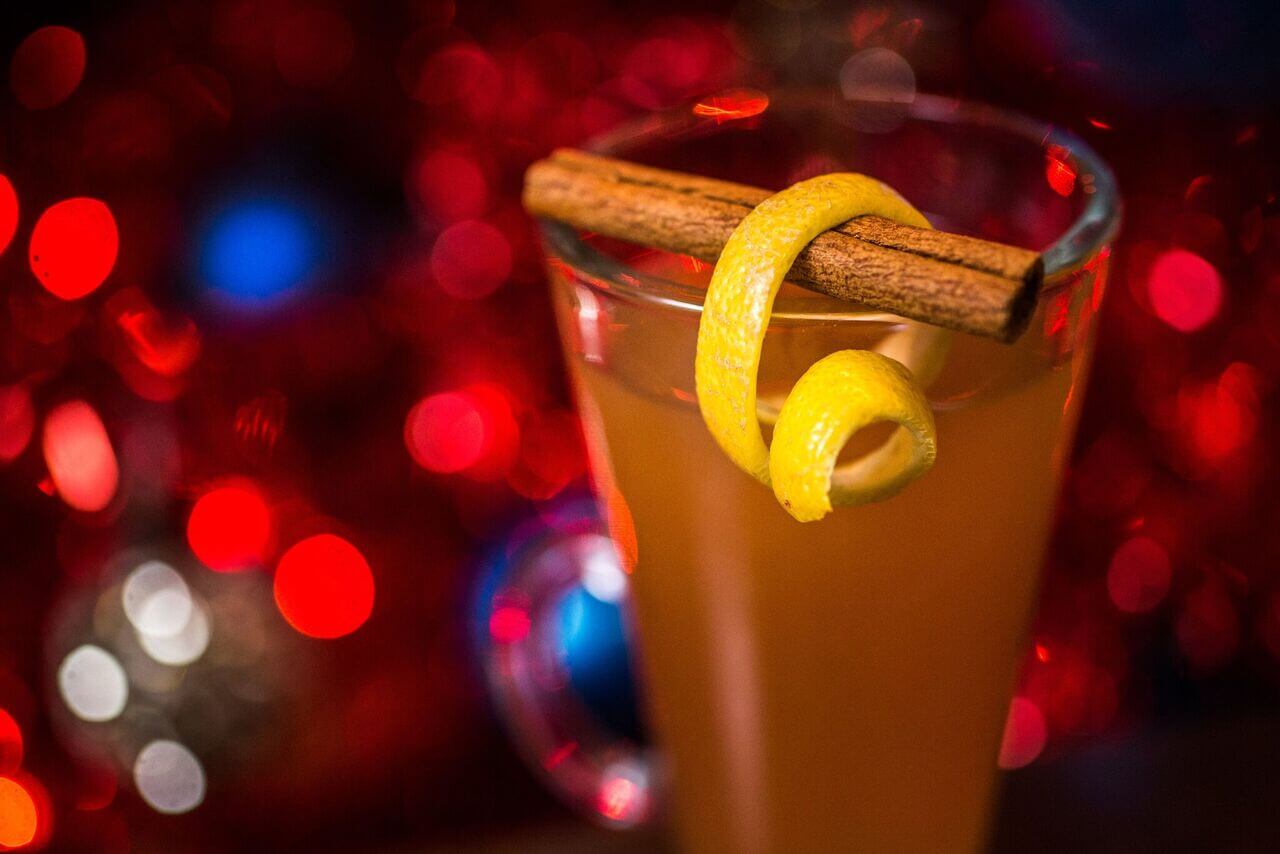 The holiday season features trees, lights, ornaments, gingerbread, candy canes and caroling… it also includes special drinks to get you in the spirit! Featured are nearly 30 special and festive cocktails you can enjoy this season, in and around Denver!

Sip On These Holiday Drinks In Denver This December 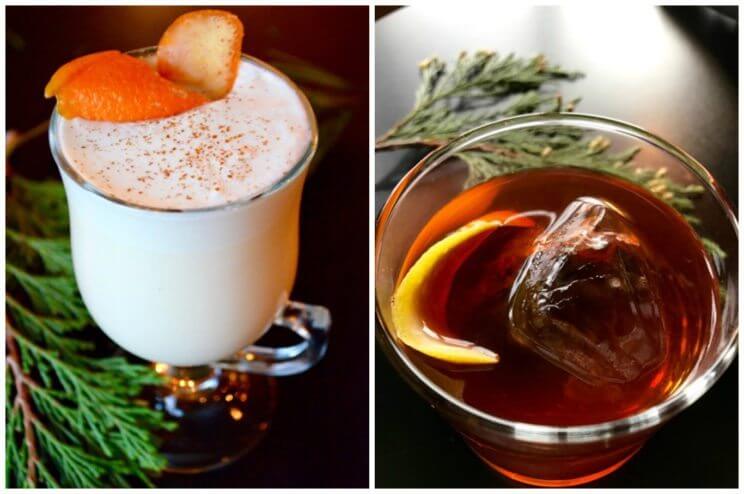 Another holiday cocktail you can enjoy is the Cognac Sazerac that is made with Cognac, Peychaud’s Bitters, a drizzle of Absinthe and simple syrup, and lemon peel. 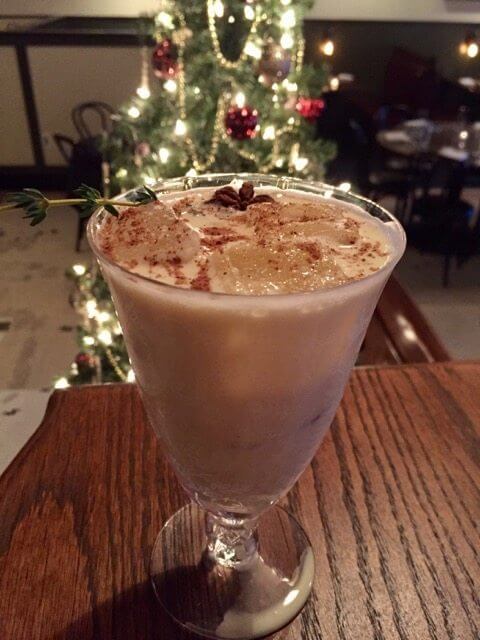 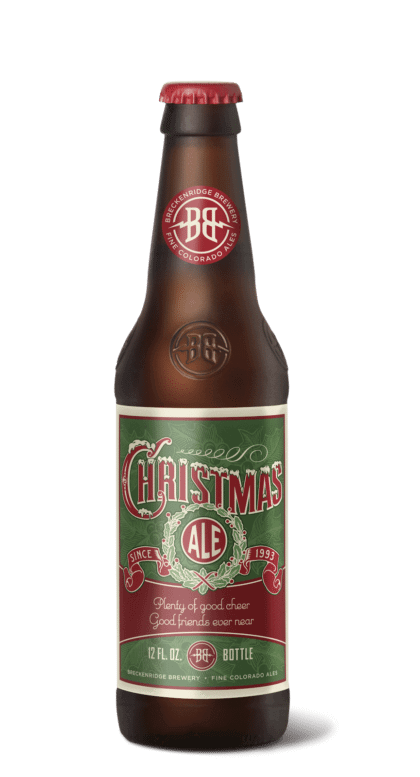 Breckenridge Brewery has launched the popular winter seasonal, Christmas Ale. the ale is a full-flavored, well-balanced, heartwarming ale meant to be shared with family and friends during the holidays.

At 7.1% alcohol by volume, Christmas Ale is a strong ale with rich flavors of caramel and chocolate from carefully roasted malts. Unlike other holiday and winter beers on the market, Breckenridge Brewery does not add any spice to Christmas Ale, rather the spicy characteristics come from the Chinook and Mt. Hood hops.

Christmas Ale is available in 12-oz bottles in 6-packs and 12- packs, 5L mini-kegs and draft where Breckenridge beer is sold.

The Cardinal | Carmine’s on Penn 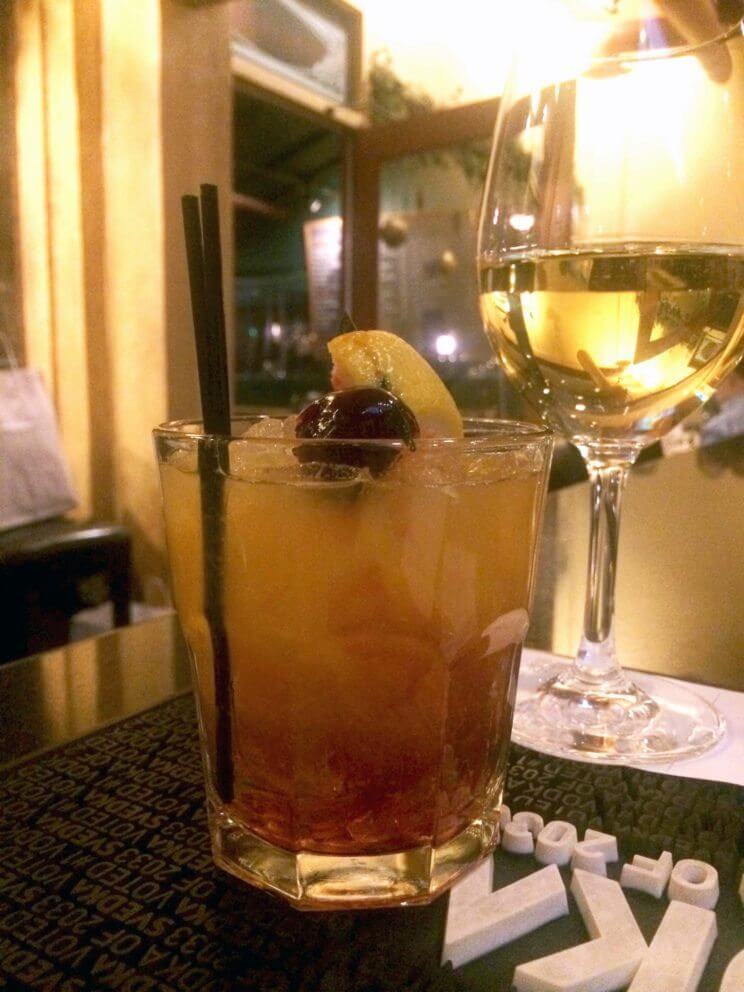 Photograph courtesy of ©Carmine’s on Penn

Carmine’s on Penn, located at 92 S Pennsylvania St, is offering The Cardinal, part of the Carmine’s on Penn Holiday Cocktail Collection. The Cardinal captures the flavors of the holidays by combining Buffalo Trace Bourbon, Averna, Montenegro and spiced simple.

Coohills, located at 1400 Wewatta St, is offering two special drinks for the holiday season. The Elves Elixir has a festive flavor and is made with Absolute Elyx, Crème de Menthe, Peppermint Schnapps, Cranberry Liqueur that is topped with a sugar rim and served on the rocks.

The Warm Winter Welcoming is a cocktail that will warm you up from the inside and is made with Woodford Reserve Bourbon, Apple Jack Liqueur, simple syrup, lemon juice, real cranberries and a slice of ginger, topped with Star Anise dust. 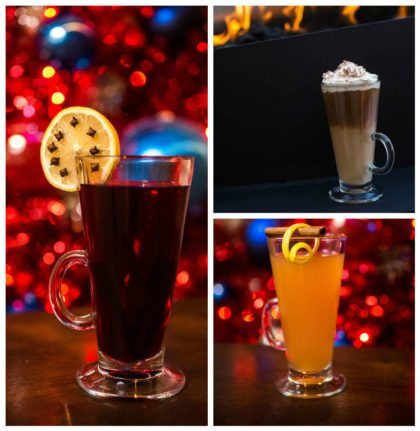 Photographs courtesy of ©FIRE at the Art, a hotel

FIRE Restaurant & Lounge, located inside the Art, a hotel, is featuring three speciality holiday cocktails this month alongside the Art’s unique Christmas decor. Sip on these cocktails whilst relishing in the hotel’s art esthetic with unique pop-art inspired trees throughout the lobby and halls. (Think: Andy Warhol inspired Christmas trees), artfully designed by local florist, The Perfect Petal.

The Jam Juice, made with syrah, grand marnier, vanilla simple, cinnamon, and clove; the Smashing Pumpkin, made with all spice infused bourbon, pumpkin puree, maple, and whipped cream; and the Bee’s Knees, made with old forrester bourbon, colorado honey, lemon, and mint. 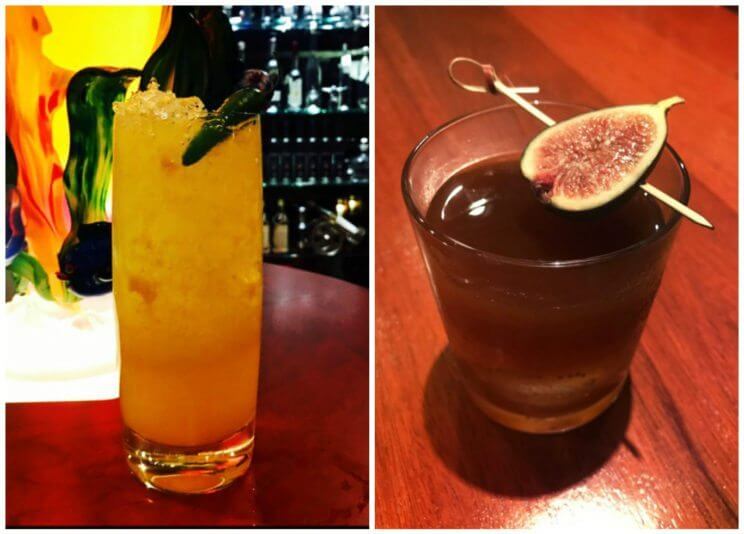 Flagstaff House, located at 1138 Flagstaff Rd in Boulder, is offering two special cocktails for the holiday season. Bad Santa, made with Habanero Tequila, Yellow Chartreuse and Kumquat Cordial, and The Avenue A, made with Fig-infused Bourbon, Punt e mes sweet vermouth and Amaro Nonino. 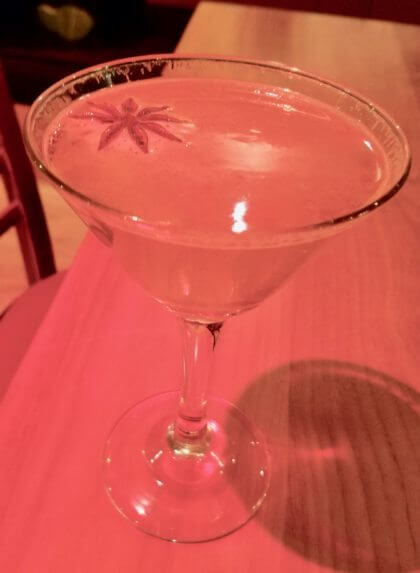 Photograph courtesy of ©The Goods Restaurant

The Goods Restaurant, which opened in early October, is offering the Wassail Cider Cocktail, a tasty drink concocted by Owner Seth Murty. The cider is made with C Squared Nona Cider, Vanilla Vodka, Cinnamon simple syrup, St. George Absynthe rinse, and is garnished with Star Anise. The Goods Restaurant is located at 2550 E Colfax Ave. 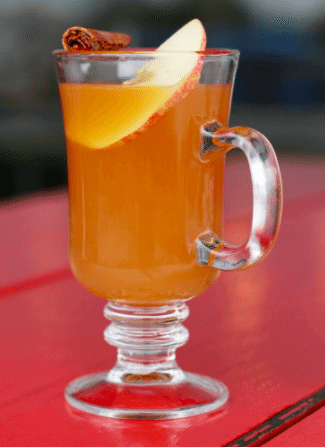 Hopdoddy Burger Bar, located at 1747 Wynkoop St, is featuring the Hot Apple Sidecar, a cheerful holiday drink for the festive season. It’s a warm and smoky drink with Grand Marnier and the flavors of citrus and spice. The cocktail is garnished with an apple slice and shattered cinnamon stick.

Psst… Hopdoddy mulls their own apple cider every day for this sidecar’s base! 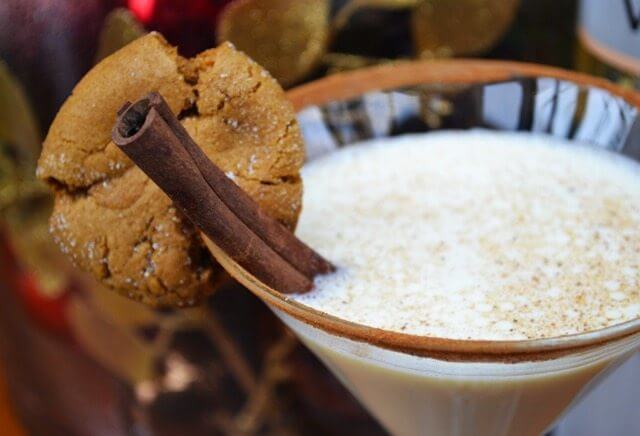 Photograph courtesy of ©The Inverness Hotel

The Inverness Hotel, located at 200 Inverness Dr W, is offering the Eggnog Crème Brûlée Martini with vanilla vodka, Frangelico, Grand Marnier and eggnog; This festive drink can be ordered at The Inverness’ Fireside Bar & Grill. 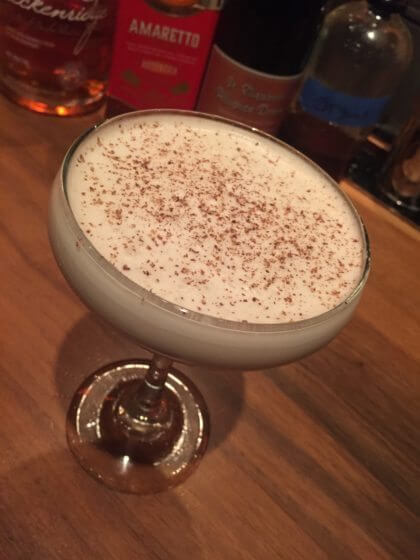 SALT, located at 1047 Pearl St in Boulder, is serving the Egg-Nogstic Cheer, a special eggnog created by SALT’s Beverage Director Wes Johnson. The inspiration for the drink comes from annual eggnog parties that Johnson’s parents used to host when he was a child.

The Egg-Nogstic Cheer receives a Colorado twist with it’s use of Breckenridge Bourbon. Johnson points out the cocktail’s luscious, silky texture with holiday nuance and an orange expression that brightens it up. 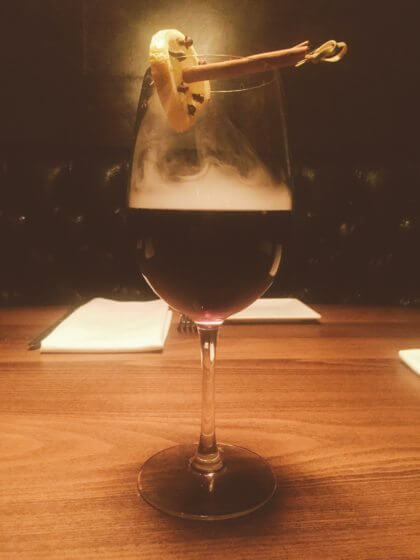 Milk & Honey, located at 1414 Larimer St, is featuring a special Hot Mulled Port Wine during the month of December. Using a ruby port wine, lemon, clove, and local honey, the mixture is gently heated and infused with citrus and spice. The result is warm, spicy and packed with seasonal aroma.

Salati Italian Street Food, located at 8270 Northfield Blvd #1485, has launched a holiday cocktail menu in celebration of the festive season.

The menu includes cocktails such as the Salati Toddy, made with Courvoisier VS Cognac, house-made honey simple syrup, rosemary and lemon; the Mrs. Claus’s Cocktail, made with Peach Street Gin, Chartreuse, lime and Maraschino Cherry; and the Yule Mule, made with fresh cranberries, lime, Maker’s Mark and Fever Tree Ginger Beer. 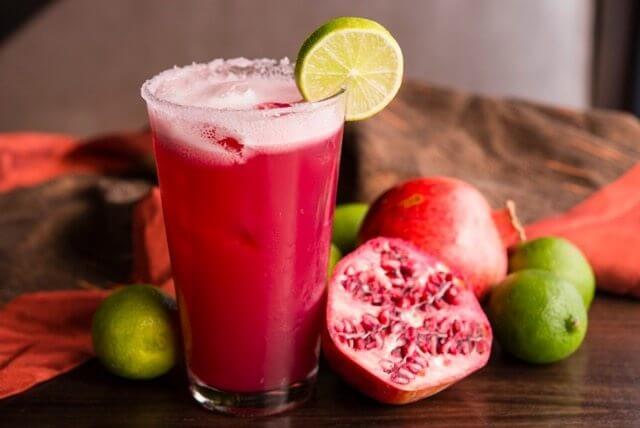 SOL Mexican Cocina‘s featured Farmer’s Market Margarita for the month of December, is a Pomegranate and Cinnamon Margarita with Don Julio Blanco, mezcal, lime juice, agave nectar and Pom juice served with a fresh cinnamon rim on the glass and topped with pomegranate seeds. SOL is located at 200 Columbine St #110. 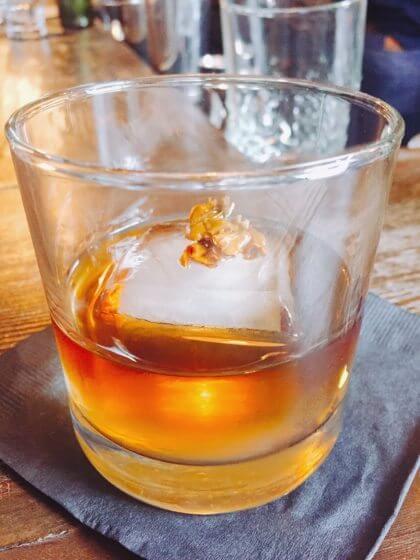 Spuntino, located at 2639 W 32nd Ave, is serving The Magnus throughout the cold-weather months. This blend will warm your tummy with W.L. Weller Family Reserve aged in Spuntino’s house-made Amaro barrels, infused with local honey and topped with preserved marigold. 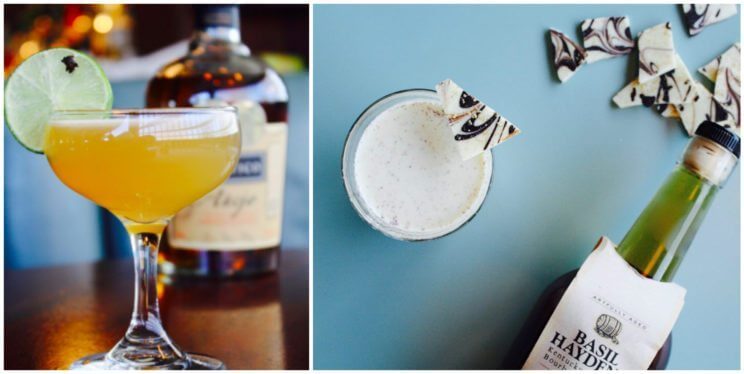 Steuben’s Arvada, located at 7355 Ralston Rd, is offering a cold-weather twist on a summer staple, the Winter Daiquiri, reimagined as a holiday offering with Diplomático Añejo rum, demerara syrup, Angostura bitters, and a spritz of lime juice.

Another speciality of the season is their Holiday Nogs, a tasty spiked house-made egg nog with Basil Hayden bourbon garnished with egg nog white chocolate bark. 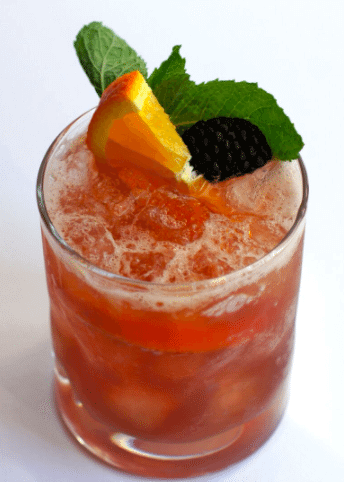 Vesta, located at 1822 Blake St, is offering a “full glass of Christmas” with the Sherry Cobbler, a fresh holiday-spiced cocktail. Cobblers are American classic cocktails traditionally made with fresh fruit, and at Vesta it’s a take with holiday-inspired Leopold Bros. cranberry liqueur smashed with oranges, berries and mint for a festive drink. 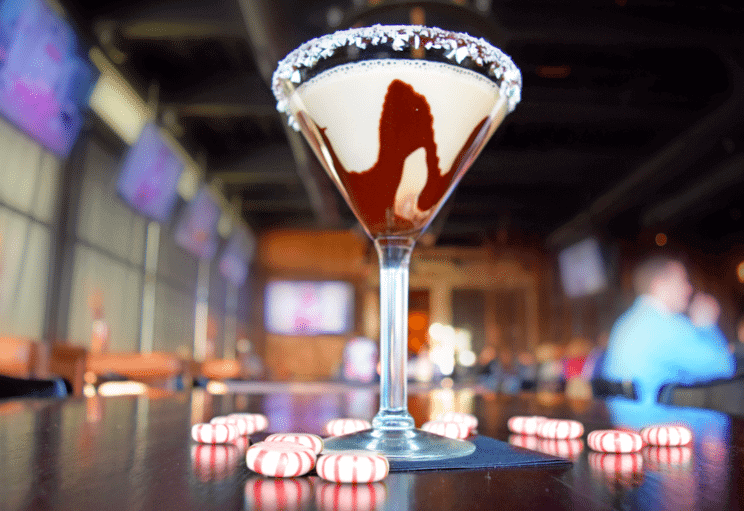 Enjoy the ViewHouse‘s Peppermint Godiva Chocolate Martini for free when you bring an unwrapped toy donation for the Care 4 Colorado Toy Drive benefiting the Boys & Girls Clubs of Metro Denver. This holiday cocktail and the toy drive will take place through December 16th, 2016. ViewHouse has two locations, at 2015 Market St and 7101 S Clinton St.

Partridge in a Pear Tree | The Village Cork 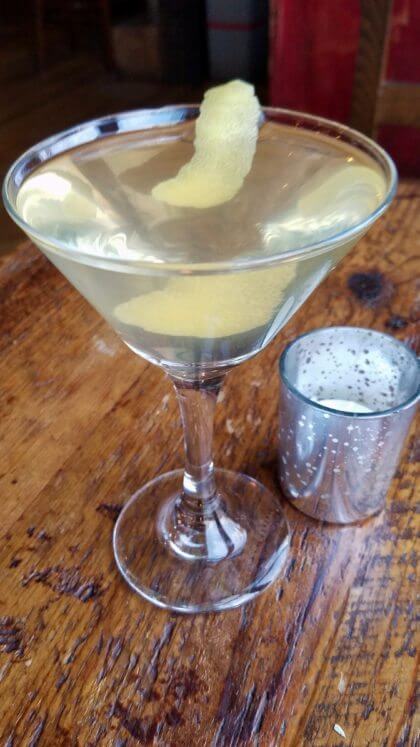 Photograph courtesy of ©The Village Cork

The Village Cork, located at 1300 S Pearl St, is offering a festive cocktail, aptly-named, Partridge in a Pear Tree. The cocktail was created by Bar Manager Lisa Johnson, who spent over two decades shaking and stirring innovative cocktails at the Cruise Room. She makes all her own liqueurs, infusions, bitters, and Limoncello.

The Village Cork is made with Square One Vodka Bergamot, Johnson’s housemade Limoncello and pear liqueur, and is garnished with a lemon twist. 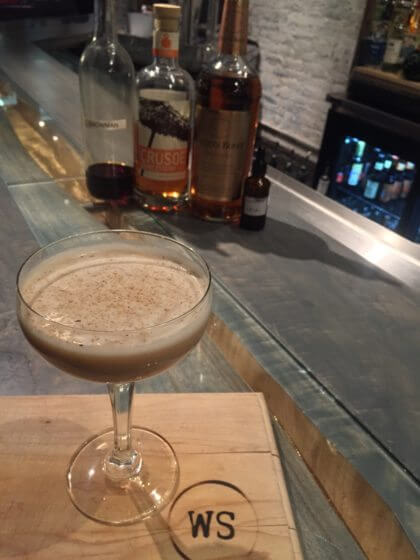 Wild Standard, located at 1043 Pearl St in Boulder, is serving the Nogg-Standard during the month of December. This special eggnog is mix of the traditional European classic, the crème française with two of their creations: the “Snowman”, and “Mulling Spices Bitters”, which adds depth and layers to this seasonal delight.

The “Snowman” is their winter flavored “batch” – it involves a complex combination of flavors and a very specific recipe that intends to transport your palate to a warm cozy place, and  they chose to blend organic spiced rum and brandy to create a balance between flavor and heat.

With so many festive drinks, you are sure to “Cheers” to the holiday season!