Every year, Halloween takes over the month of October—and hey, we’re not complaining! There are plenty of creepy, crawly events going on in Denver this season; from costumed bar crawls to decay-filled zombie proms.

We compiled a list of 15 haunted parties, concerts and throwdowns that cater to a more mature crowd. Whether you’re looking to get down at a silent disco or catch a killer at a murder mystery party, there’s a spine-chilling get-together for you on this list. 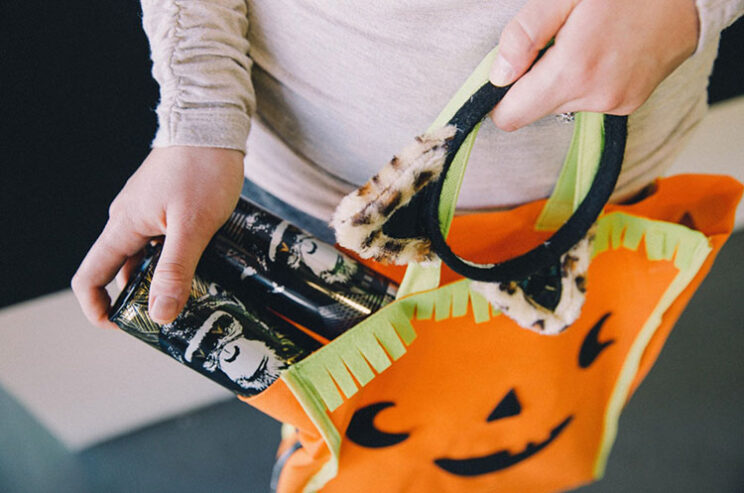 The weekend before Halloween, head to the Infinite Monkey Theorem on Larimer Street for a special Hallo-WINE event! The party is completely free and features a silent disco with music from Destiny Shynelle and a costume contest—complete with many fabulous prizes.

Calling all Denver party people! You’re invited to a night of costumes, happy hour and murder mystery abounding at Fleming Manson this spooky season. Attendees will be treated to a few games of Mafia, a fun and easy murder-mystery game. Entry is $30 and includes unlimited beer and wine and a catered dinner.

Spend the Friday before Halloween roaming the streets of LoDo with hundreds of other costumed Denverites! Passes cost $25 and include a welcome shot ticket for select venues, drink discount vouchers, free nightclub entry passes and a pub crawl map of the 10 participating venues. 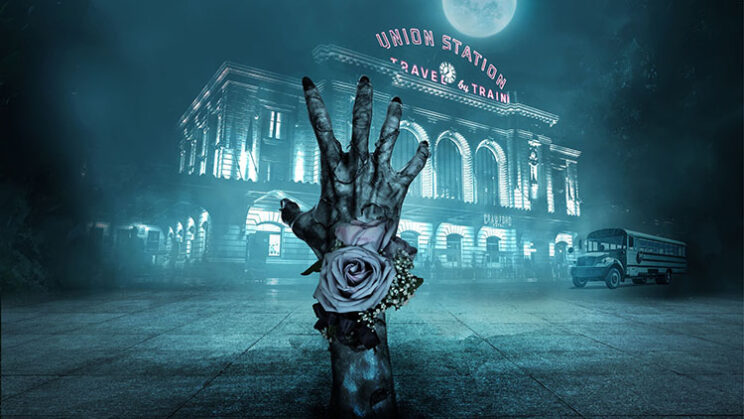 While love might be in the air this Halloween, the dead have arisen at Denver’s iconic Union Station. Travel back to the 1980s at this ghastly prom with killer beats from a live DJ, spiked punch cocktails and a historic setting with ghosts hiding around every corner. Make sure to come in your best costume—a grand prize of a free night at the Crawford Hotel will be gifted to the “deadliest” couple of the night! Get your tickets soon as this event tends to sell out quickly.

This year, celebrate Halloween at Red Rocks! The natural amphitheater will feature live music from Gramatik, Kayzo, Ghastly, Tom Morello, ARMNHMR, Ducky and Mom N Dad. To add to the experience, shuttles will be running from both Thirsty Lion Gastropub & Grill at Union Station and Illegal Pete’s on Colfax—where you can start the party early with food and drink specials prior to departure!

Ghouls, ghosts and video games—oh my! Party like a monster at one of the Denver area’s most exciting Halloween events, featuring an open bar, a live DJ, a dance floor, video games, costumes, cosplay, a silent auction and so much more. Tickets cost $45 (until October 19 when they go up to $55) and go to support Geeks of Grandeur, which brings games, fun and joy to hospitalized children. 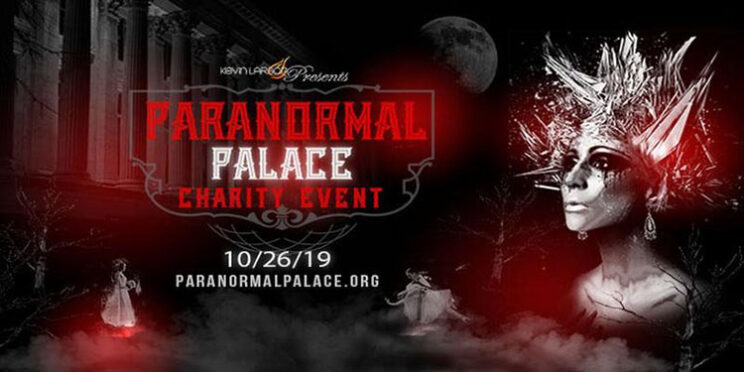 For over a decade, Paranormal Palace has been one of Denver’s biggest and most exciting Halloween events! This nationally acclaimed Halloween party features craft cocktails, food trucks, multiple DJs, over 30 performers and a costume contest with a $5,000 reward. Ticket sales go to support the HUMANKINDness Project.

While the Colorado Gold Rush didn’t really pan out—the spirits of the mineworkers, saloon owners and townsfolk still linger today, and now they’re ready for a hauntingly good celebration! Dress up in your best ghost town-worthy attire and join Hostel Fish for a night of spooky surprises, throwback cocktails and maybe even some paranormal activity…

Join Revel Social, a bar and restaurant just steps away from Coors Field, as they put on a creepy carnival-style event you won’t want to miss! CARNEVIL features a costume contest, a giant spin wheel, themed drinks, carnival games, funnel cakes and so much more.

On Saturday, October 26 the two floors of the Denver Beer Hall at Bierstadt Lagerhaus will be transformed into an eerie All Hallows Eve night event for The Full Moon Party! Enjoy an open bar, a DJ, food trucks, oversized games, wondering entertainment, karaoke, and much more. There will also be a $1000 cash prize for the best costume — so get creative and over the top with your costumes to impress the crowd! 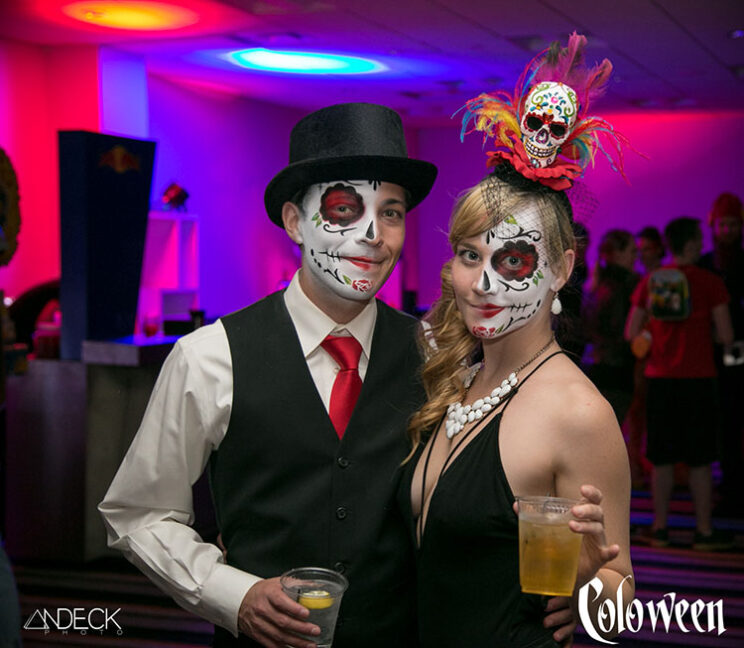 Revered as the best Denver Halloween party for over nine years, the annual Coloween Party is back and we couldn’t be more excited! This frightfully fantastic celebration will transform Stanley Marketplace into a haunted venue full of twisty corridors, themed bars and retail establishments. In addition to some spooky decor, there will also be top-rated DJs, theatrical performers and thousands of costumed guests competing in the Coloween costume contest (which features a $1,500 cash prize!).

For a fun, trendy and exciting Halloween experience, head to The Rackhouse in RiNo for their special Full Moon Costume Party event! Both floors of the brewery will be transformed into an eerie All Hallows Eve soiree. Enjoy an open bar, a live DJ, food trucks, games, unique entertainment and, of course, a costume contest with a $1,000 cash prize.

Who says that bands can’t dress up for Halloween too? This year, join One Flew West, a Longmont-originated band as they play as Tenacious D for a night. Also in attendance will be Coastal Wives playing as Counting Crows and Dirty Rotten Rhymers playing as the Beastie Boys. This event is 18+ and costs only $12 to attend, so get your tickets today!

Halloween Spookeasy at the Cottonwood Club 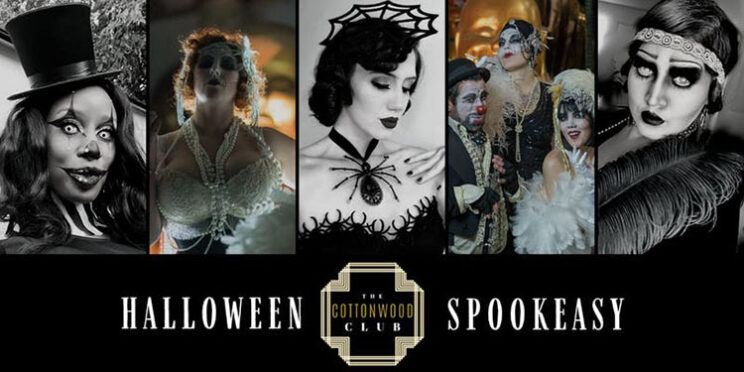 Photo courtesy of The Cottonwood Club

On the day after Halloween, dead creatures from the 1920s will take over The Cottonwood Club for a night full of spooky surprises, a costume contest, fortune-telling and more! This one-of-a-kind event will be held at Ironworks and will feature a curated selection of craft cocktails, wine and beer along with plenty of spectacular live entertainment.

The weekend after Halloween, head to the Westin Denver Downtown Hotel for a haunted evening you won’t soon forget. Celebrate with fabulous entertainment, multiple cash bars, DJs and some of the most creative costumes in the city at an event CBS Denver called “Denver’s top Halloween party for adults.”

Have a Great Halloween!

What are you planning on doing for Halloween this year in Denver? Let us know in the comments!