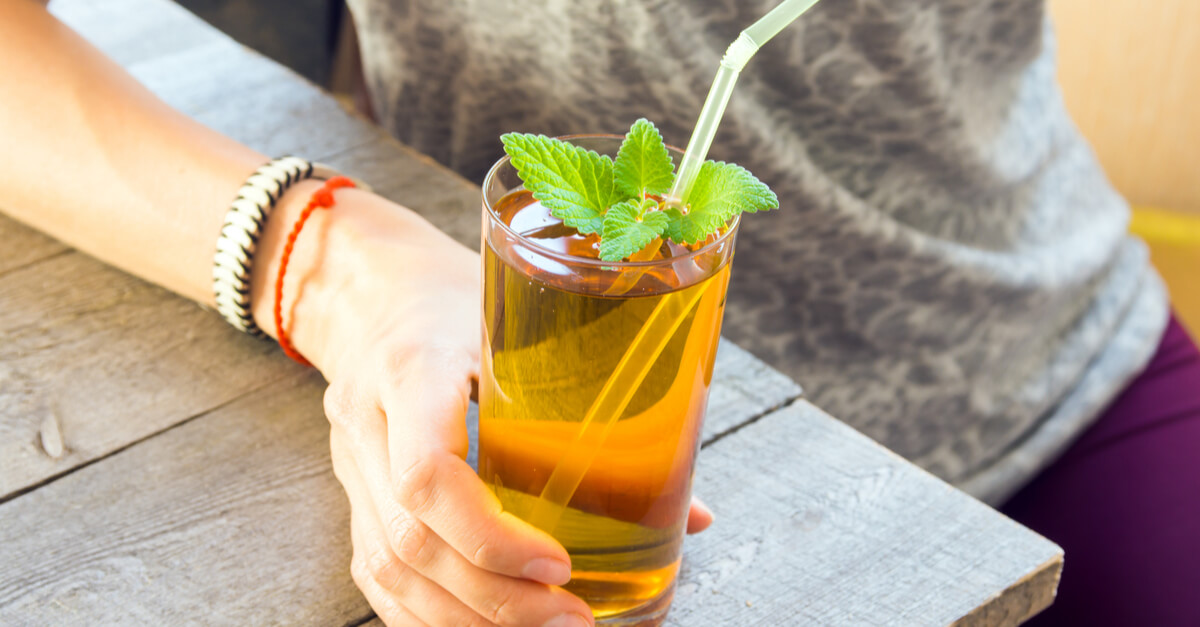 Kombucha is a simple fermented drink made out of tea, sugar, water, and a SCOBY (Symbiotic Culture of Bacteria and Yeast). It has been touted for the health benefits of better digestion, increased well-being and a number of other claims.

Colorado kombucha is on tap at breweries, restaurants, coffee shops and on the shelves at grocery stores due to a growth in local kombucha brewing companies. At Banded Oak Brewing kombucha is free for the Designated Driver, so you can be safe and healthy!

Then there is American Cultures Kombucha Taproom, a business that began as a food truck and grew into a Denver taproom that serves fresh glasses of kombucha and other delights. Below are native Colorado kombucha companies and where to find their fermented creations. 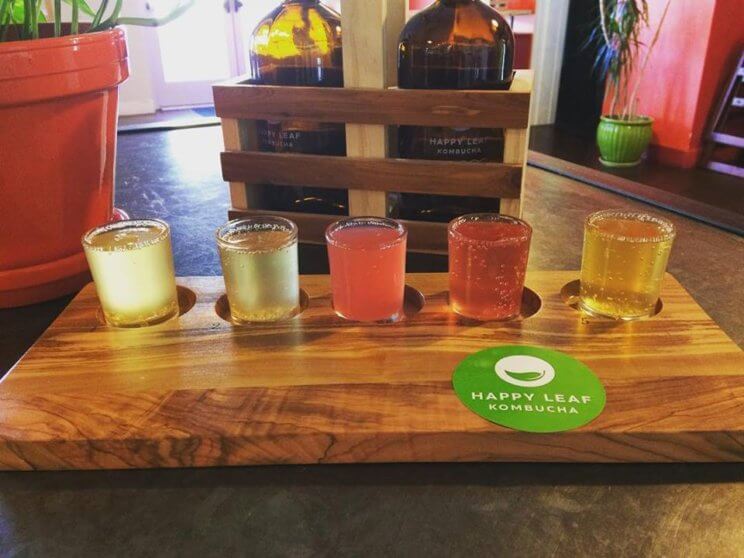 Happy Leaf Kombucha started brewing in 2013 and found its customer base at the Cherry Creek Farmers Market. They choose their ingredients with care, making sure that everything is organic, non-GMO, and pesticide free. That attention to detail has won them quite a fan base in Colorado and beyond. You can find them in over 100 craft breweries, coffee shops and restaurants.

Psst… Find a place near you that serves Happy Leaf Kombucha or visit their taproom in Edgewater. 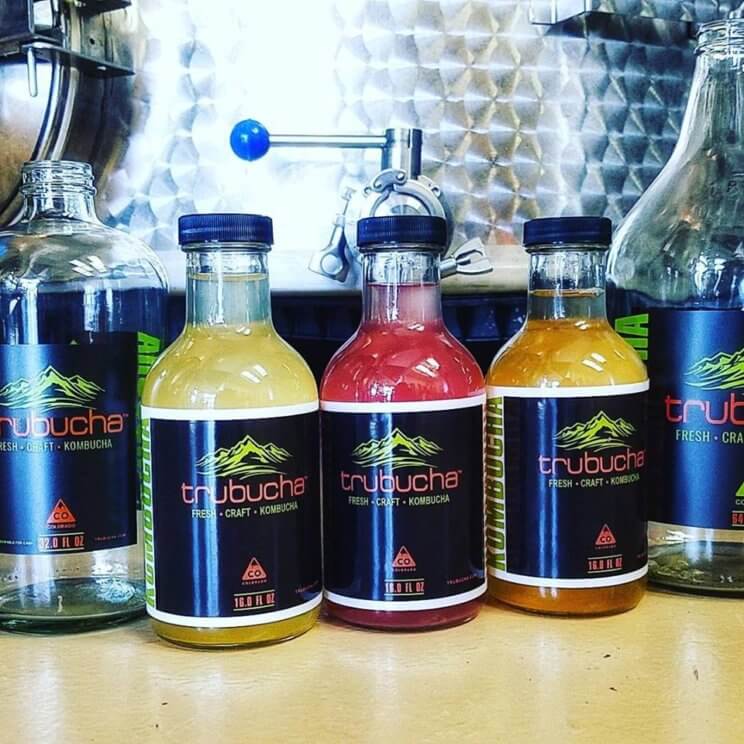 Trubucha began as a home brewing experiment that grew into a full scale kombucha business. They have expanded from filling glasses for neighbors to being in over forty coffee shops and breweries around Colorado. The demand for the probiotic drink has been so steady that they opened up a taproom in Lone Tree in early 2017.

Psst… Find a place near you that serves Trubucha or visit their taproom. 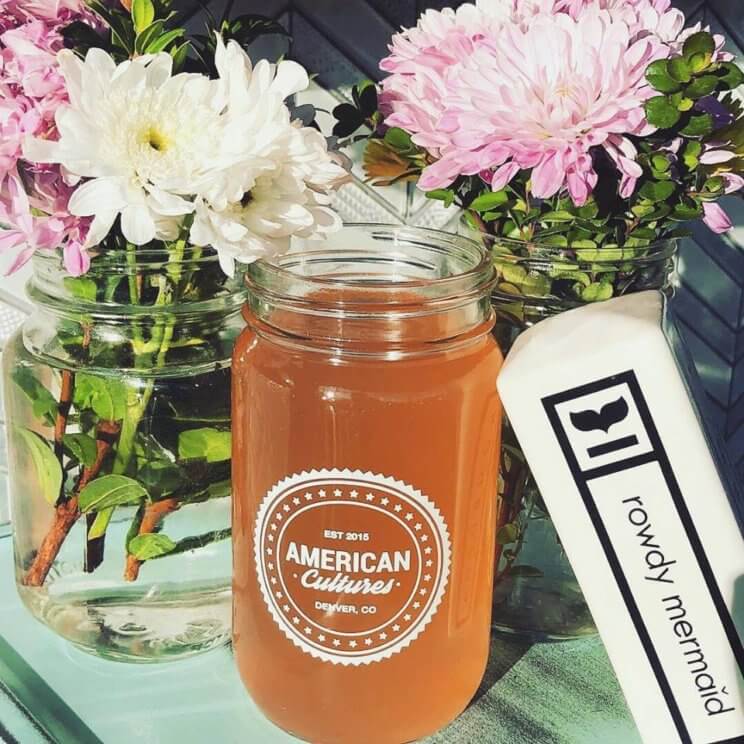 The Rowdy Mermaid name was inspired by founder Jamba Dunn’s four-year-old daughter who was being a little over enthusiastic splashing at a hot springs. He began making kombucha after losing his job and deciding to follow his dreams (with his wife’s support). He has been doing well and enjoys creating interesting flavors with unexpected spices like Chipotle Pepper and Hibiscus.

Psst… Find a place near you that serves Rowdy Mermaid or visit their taproom at the Rayback Collective in Boulder. 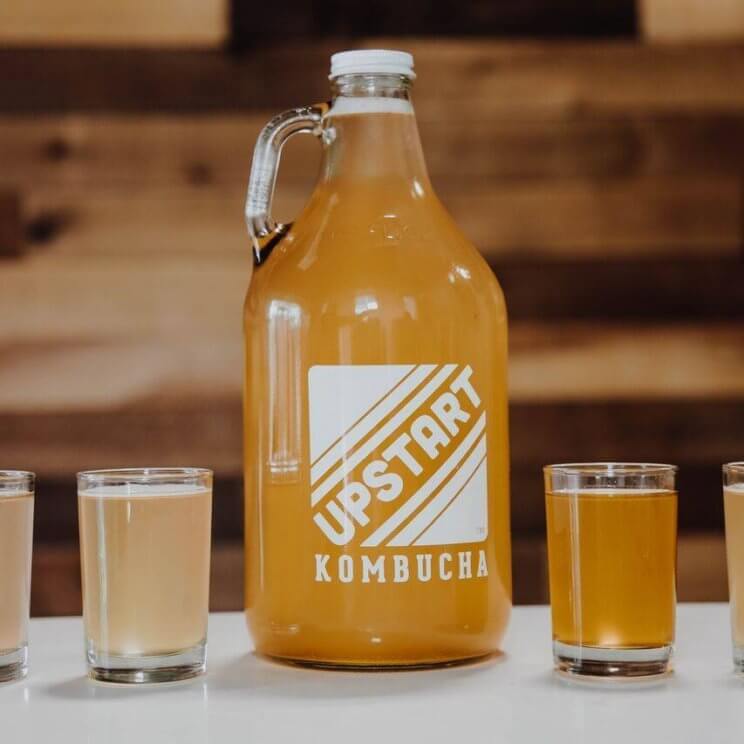 Upstart Kombucha started with five gallon batches to now producing kombucha out of four 800-gallon tanks. This company is delicious at anytime, but especially encourages drinking kombucha after a long run or workout for a refreshing feeling.

Psst… Upstart can be found in grocery stores around the Front Range or at their taproom in Boulder. 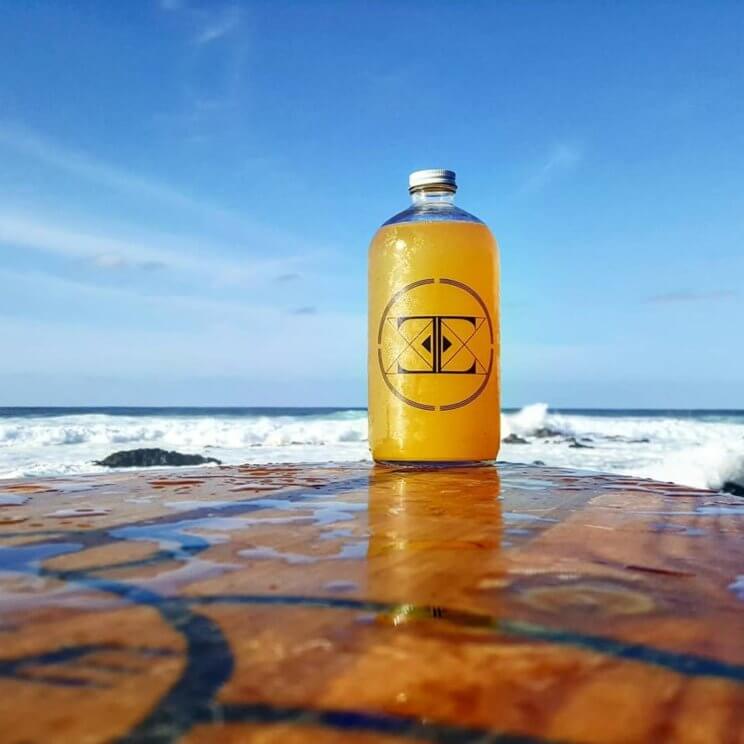 Elevated Elixirs is a growing company that creates kombucha and a other drinks for enhanced health. It got started in the Aspen Highlands, is now in over twenty locations on tap in the Aspen area and is making its way into the Denver market. If you happen to see Elevated Elixirs at a farmers market you might be able to get additions in your kombucha, including a little CBD oil.

Psst… In Denver you can try it on tap at Nixon’s Coffee House. Nixon has partnered with Royal CBD to offer “elevated elixirs” online as well. (Shipping free.) 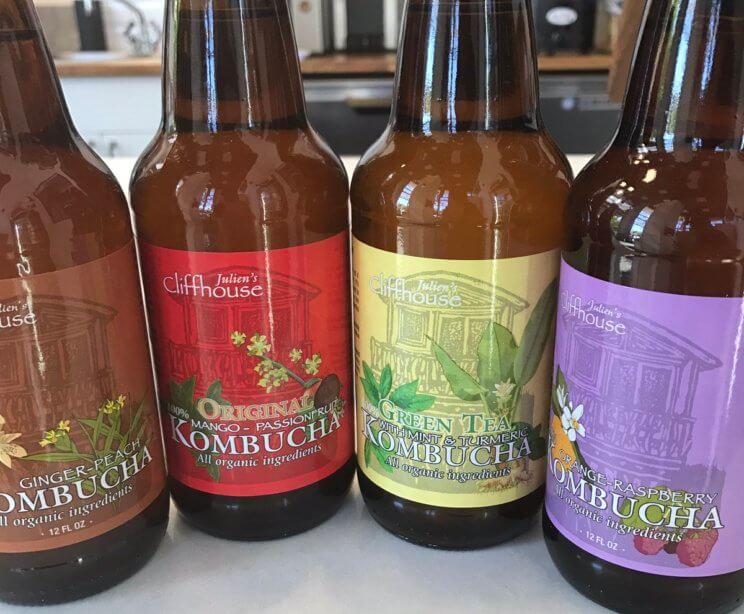 Cliffhouse Kombucha is created in Jamestown CO, a little town that almost didn’t survive the 2013 floods. Rudiger Schmidt, the owner and creator, has focused on keeping any accidental alcoholic content down and creating a crisp and refreshing kombucha.  Cliffhouse features flavors like Green Tea Mint and Turmeric or Hibiscus Flower. You can find it in grocery stores, restaurants and coffee shops across the upper Front Range. 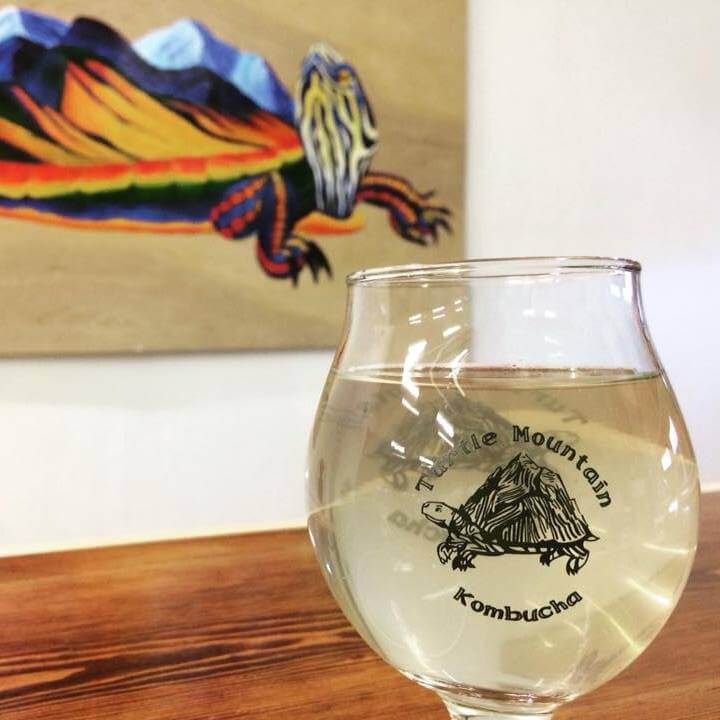 Turtle Mountain Fermentery is all about the making things bubble. They produce kombucha made from black tea and Yerba Mate as well as whipping up batches of kimchi (Korean dish of fermented vegetables) and sauerkraut. You can find their kombucha in restaurants, breweries and coffee shops across the Front Range or visit their taproom in Fort Collins when it opens this March 2018!

Psst… You can find their kombucha in Denver on tap frequently at American Cultures Kombucha TapRoom and Nixon’s Coffee House. 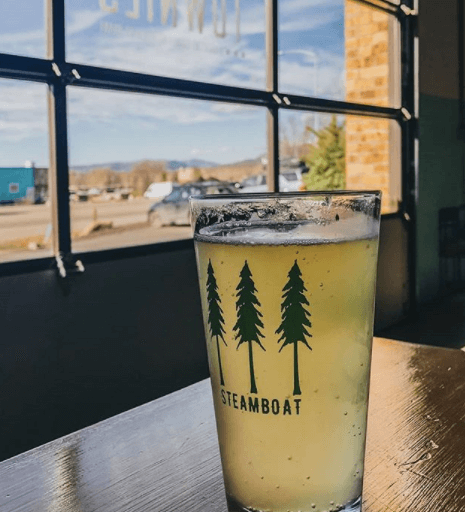 While most kombucha batches are started with cane sugar and black tea, Joon Kombucha replaces the cane sugar with Colorado wildflower honey and the black tea with a hand crafted blend of green tea from Happy Lucky’s Teahouse in Fort Collins. This creates different blends of flavors while supporting local beekeepers and small business. Curious about the taste? Find them across the Front Range and let us know what you think!

Psst… You can often find them on tap at American Cultures Kombucha TapRoom, Factotum Brewhouse, The Molecule Effect, Crazy Mountain Brewing, and Highlands Cork and Coffee. 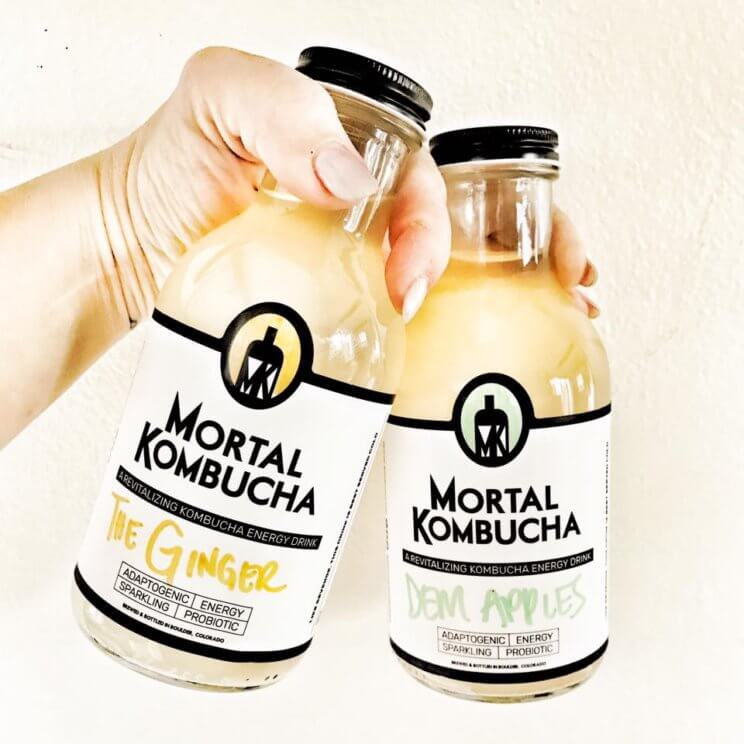 Mortal Kombucha comes from the hard work of Becca Schepps who likes to market it to athletes as a great after workout drink. Each 12oz bottle has four grams of sugar or less and with great flavors like “Napalm-ergranate” or “Hibis-kiss” she keeps it fun and flavorful.

Psst… Find the drink in shops along the Front Range or in Denver at American Cultures Kombucha TapRoom.